NATA is an Alter/Ego vocal. Developed by a team consisting of Azureflux, Tora, and Uru.[2], she was published by Vocallective and voiced by DariaP. Her illustrator is Uru.

!NOTICE! These vocals [NATA and VERA] are not supported by PLOGUE. A user's support is at their own risk.

In late July, Azureflux reported they were still working on her and were expecting to release her in 2016. More information would likely come in August.[3]

In October 2016 some information her demo video "New EP & NATA Update" mentioned that NATA came during a year of Azureflux not doing much in the way of music. He asked that expectations not be too high and that the vocal was an extension of himself and the voice provider. Since she was releasing in 2016, there was hope that more vocals would be released the following year. The development cycle was planned to be 7 months. Nata was due for release in a month or two. In the video, Azureflux played a tone demo which was previously shared with a selective few. On December 31, the first full demo of NATA was released. It was a cover of a song by Molly Nilsson called The Lonely. In the description of the upload on Azureflux's channel, it was mentioned that NATA would be released following week. [4]

She was released on January 11, 2017. This was reported by KVR, BPB and Rekkerd.

At some point during 2017, new customers buying NATA were told she had became unsupported by Plogue entirely and a 3rd party vocal uninvolved with them at all. Plogue themselves noted this in their own forum.

Further reading on the matter:

The wikia asked readers not to jump to conclusions and allow Azureflux and Plogue, as well as everyone else involved, to sort these things out.

NATA is a 23 year old female capable of singing and talking in English.

It contains an Operating system OS that processes English into the X-SAMPA and vice versa. Using Niev, NATA can synthesize in real time.[8] 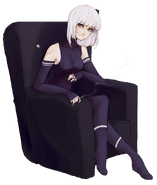