Edit
watch 01:36
We're Getting Mutants in the MCU - The Loop
Do you like this video?
Play Sound

Marie Ork is a vocal for Alter/Ego. She has three English voicebanks, developed by DSmolken, that were sourced by a female vocalist for the group "Ennorath".

DSmolken, using the alias pklima, discussed at Talkbass about making a metal female vocalist. The interest was first sparked in 2014. Though there were plenty of free instruments and the like for constructing metal songs the vocalist was considered the final frontier. DSmolken happen to know a female death metal vocalist that they had worked with in the past. He also knew that Death Metal was a niche genre of music and was rarely explored by vocal synthesizers. Lacking experience, they decided to focus on this genre of music as it seemed easier to produce.

Before production started, research was made on existing vocal synthesizers to find the most suitable program for the vocal. Following this, they entered production and she was in production for quite some time. The first recordings were of basic midi samples and were later made available for download.

Another collection of recordings were made for UTAU, but due to the Japanese locale setting having to be activated, the software was never downloaded and this version abandoned.

At the same time the UTAU vocal was being considered, Chipspeech was released by Plogue. Later that autumn Plogue released Alter/Ego, which was focused on modern vocal synthesizer technology. Naturally, Plogue recieved many requests for vocal production. Due to previous collaborations, Smolken's offer was accepted by Plogue.

Smolken approached a member of Daisy's production team and asked about the process of making a vocal and work began in October 2015. The kit given was a small section of the source data for Daisy. He noted it took three or four sessions, including re-recordings of unsatisfactory results, to achieve the final recordings. Tora Ouji was the one responsible for turning the raw vocals into an Alter/Ego voicebank initially.

The development was also considered a lesson on linguistics as they had to learn many new things about vocal sounds such as different types of consonants. They learnt things such as the human vocals inability to growl certain sounds, leding to some sounds such as a "fffffff" having to have two versions to see which was more effective.[1]

Marie was first made known in March 2016 by D Smolken when they asked about adjustments on a heavy metal female vocal.[2]

The first working prototype existed with only 3% of the needed data. At this point there was no way of knowing how Alter/Ego would handle a Death Metal vocal. The early results sounded quite like the vocalist and those working on Alter/Ego itself were satisfied with the results. On May 2nd when D Smolken was talking about this on talkbass, the results were then at 10% completion. At 17% it was noted that at 100% they would need to make corrections to the vocal. D Smolken did not want to post anything yet as they felt first impressions are important.

At 30% Plogue themselves made adjustments to the perimeters of Alter/Ego to work better with growl vocals. They had some concept ideas they liked as well at this stage. The Formant Singer 2 version was brought in, though it was later also included in Chipspeech, at this point the new engine version was not known to the general public.

At 50% it was noted that they hoped to have everything working for October in time for Halloween. At this stage the prototype sounded more like a horse whisper then a growl. They were tweaking the vocal to see how hoarse they could make the vocal still. D Smolken had also managed to find a way to make pitch easier to recognize, which was useless for clear vocals but useful for swirly ones. Information on consonant clusters later came.

For a long time she was not named. However, during a conversation over creating a name based on "Merry Oaks park", D Smolken said they would speak to the provider. The name "Marie Ork" was unveiled in September 2016. Though a beta vocal was ready and the voice was growling, D Smolken mentioned they were entering the KVR Developer Challenge, therefore no demo could be made available until December due to the contests own rules. This also delayed demos and release until after the competition.

When she was announced as being a entry into the KVR contest, public development ceased and work on a completed alpha had become the main focus. The original intention was to hold a contest for design entries, this also could not occur. FlyingCarParts offered to do the graphics after D Smolken mentioning the need for graphics still at Vocaloid Otaku forums.[3]

The recording of some broken phonetics and mispronunciations took several weeks to do. A week and a half before the KVR deadline they had the graphics and voicebank nearly complete. Plogue was asked to produce the signed off version to send to beta testers. A decision was made to make two voices from the same data. Presets were made, this took D Smolken about half an hour to do while the developers cleaned up the XML data. D Smolken went over the data a number of times during November an did not take a single day off during this time. He also did not go out in the evenings so he cold work on her during this time also. Her data swelled to 4.9 GB from 1 GB of data by the time of the deadline.

The last week was focused on fix-ups and documentation clean-ups to make things easier for users to install her. Minor tweaks to the GUI were also made.[4]

She was one of 41 contestants. Users who wished to vote for her could link here. She eventually won 17th spot and was the 2nd highest sound library in the results, her demo received 4,500+ views during the voting.

Her name is a play on "Merry Oaks" and was a suggestion from a fan. The name "Merry Orcs" was put forward to the provider and the name "Marie Ork" was settled on.[5] The name "Marie" came from ewe's milk cheese "Flower Marie".[6]

She is meant to be a goblin character rather then a human one. The main inspiration for the design is Albert Pyun's movies. It was known at the time that he was working on the movie "Interstellar Civil War", in which one of the central characters is known as the "cyborg witch of Endor".[7]

FlyingCarParts originally wanted to design her with a wood staff, but dropped it as the Vocaloid vocal "Avanna" already was depicted with one. Though the intention was not to portray Marie as a "wood elf". Marie is designed with a cyborg-goblin-witch direction in mind. They originally thought Orcs and Goblins were the same thing and admitted they knew little on fantasy classifications. While no set personality has been established for her, FlyingCarParts depictions direction was to aim to portray her as "confident, brave, and passionate. And possibly a bit barbaric, if excited enough!".[8]

D Smolken's own notes noted that he personality did not want a character that looked "serious and grim" the vocalist herself asked just for longer ears. FlyingCarParts had originally come up with a cute and friendly sketch design. The bat-hair band and skull necklace were added later to make her look more "witchy". A friend of D Smolkens did the alternative designs and outfits in a different style. The team behind her did not want a anime-girl for the design. The "Space" design is aimed to be medieval painter-style. The intention was to make it clear that she was "un-Miku-like".

A supporting sample library can be downloaded of the female vocalist. This file contains 272 various sounds for creating words, though is not a completed vocal synthesizer library.[11]

It is also noted that a French vocal may be released at a later date as with ALYS came French vocal library support. Marie Ork‘s vocalist happened to be able to speak French. They also discussed adding shrieks and normal singing results at a later date though are focused on producing the current vocal, especially if the ability to morph between vocals ever becomes possible. There was consideration for a thrilled "r" sound, though a long R exists this currently is not viable. 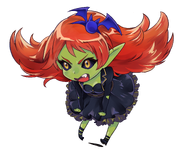