LEORA is the last Alter/Ego vocal to be released on the engine. She is the second vocal developed by VoxWave, and the first to be produced in collaboration with Chorical. She is voiced by TBKitsune and illustrated by Saphirya.[1]

Several weeks before a formal announcement was made, cosplayers were sent pictures of the design. She was officially announced on June 30th, 2016.[2]

On April 7th, 2017 it was announced in a YouTube video uploaded onto VoxWave's account that LEORA would be bilingual in French and English. Each language would come with two voice styles, "Core" and "Power" whichy would make use of the multipitch capabilities introduced to the engine. Following this pre-alpha demos of the "Core" and "Power" French voicebanks uploaded separately. [3]

Pre-orders were launched at a discounted price on the April 8th, 2017. Those who pre-order will receive the French beta upfront and the English as a free update.

Leora's first original song made a debut in the album "Emancipation". The song, titled "Fugitive", accumulated a total of 5,000+ views on YouTube.

VoxWave has noted that an album of songs written for Leora will be released and titled, "Ambition".

Despite having a release goal of fall 2018, it has since been pushed back. On June 1, 2019, Voxwave held a livestream with news about the development of Leora.[4] They revealed that the voicebank was now being developed in association with Chorical[5], with a goal of release before Christmas.

LEORA is both the second French vocal and first vocal to be bilingual in French and English. Both voicebanks will come with a "Core" and "Power" aspect, including multi-pitch capabilities, and a vocal cross feature. After full release, she will be the final official Alter/Ego voicebank developed for the software.[6]

LEORA is designed with a more "rebellious" approach in mind to her character. She embodies "Ares and Aphrodite" to ALYS' "Athena" nature, designed to cover concepts ALYS cannot. LEORA was also introduced with the idea to learn to improve ALYS. In short she was created to make ALYS's world more "dense".[7]

The name "LEORA" is rooted in numerous cultures, but most commonly is derived from a meaning of light, or "shining light".

LEORA's concept is prominent in her design. Described as having an "Ares and Aphrodite" avatar, she is the polar opposite to her counterpart, ALYS. Contrasting ALYS' blue and black, LEORA sports a red and white color scheme (albeit with black accents). She has common virtual singer tropes such as waveforms, a headset, and a microphone with an almost RPG-like stand. 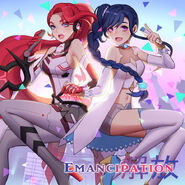 Chibi of formal outfit
Add a photo to this gallery

Retrieved from "https://alterego.fandom.com/wiki/LEORA?oldid=2317"
Community content is available under CC-BY-SA unless otherwise noted.