Daisy is a vocal for Alter/Ego. She was the first vocal presented for the software and, for a time, its default. Her voicebank consist of English and Japanese capabilities and was voiced by Crusher-P, a VOCALOID and UTAU producer. Daisy was illustrated by the artist, Pixoshiru.[1]

Daisy was produced as an experimental voice for Chipspeech. Her creation led to the development of a separate software to handle modern vocals, Alter/Ego.[2]

Daisy was unveiled on August 26th, 2015 as the first vocal for Alter/Ego. She was offered as a demonstration vocal and was distributed for free.[3] Alongside Alter/Ego itself, she was released on 9th September 2015.[4]

Daisy was set up for retirement on 31st October 2016. The reason for her retirement was said to be technical related. Bones became the default vocal for Alter/Ego instead.[5] In addition to this, her copyright was also held by Crusher-P, who made the call to retire her.[6]

The original link to her download has been removed and Crusher-P has since expressed a note that they are uncomfortable with users who still use the vocal.

In the worlds of Alter/Ego and Chipspeech, Daisy is regarded as a temporal anomaly.[7]

According to Dee Klatt, Daisy used to get stressed out over colors and cats. She would typically say bad things, but meant well.[8] Dee also mentioned Daisy was on a secret mission.[9] Spencer AL2 noted when she left, codes appeared and that he would like to search for her if he could.[10] [11]

The name "Daisy Bell" is a direct reference to a notable moment in history, the song the first computer to sing performed.

Daisy is a human female with white hair, blue eyes, and pale skin. She wears a blue hat, dress, and bracelet. The background of her Alter/Ego version features her leaving a steam powered time machine. On it is a Back to the Future-style Flux Capacitor. 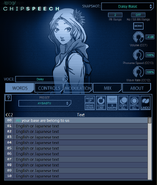