ALYS is vocal for Alter/Ego. She is the second vocal produced for the software, the first French vocal, and was developed by VoxWave. In addition to her French vocal she also has a Japanese vocal. ALYS' voice is provided by the French Utaite, Poucet, and is illustrated by Saphirya.[1]

On January 13, 2013, the first hint of a possible French VOCALOID was provided with enthusiastic news posted on Vocaloid.fr, with the intention of announcing the project.[2] Some communities were skeptical due to the lack of involvement from well-known sources.[3] However, on October 16 of the same year the project's legitimacy was confirmed by Anders of VocaTone After the confirmation, a new thread was created on VocaloidOtaku.[4]

During November of 2013, a survey to gauge potential interest for a French vocal was announced from VoxWave's Twitter. On this survey was a question for a secondary language; English or Japanese. Japanese was the winning candidate of the two.[5]

On January 14, 2014, a demonstration of the provider's voice was uploaded to the VoxWave YouTube channel. This was an a capella version of "Koibito wo Uchiotoshita Hi" from Sound Horizon. (Note; it is not a software demonstration) It was later confirmed that there would be a follow up demonstration with the voice provider singing in French.[6]

On VoxWave's website, it was announced that crowdfunding for the product aimed to be launched in March or April, assumingly ending in May. The crowdfunding would pay for the license, voice provider, as well as for renting the recording studio; it was estimated that the total amount needed would not exceed €7000. Other costs would be covered by VoxWave themselves.[7]

On January 31, 2014, a design contest was announced for ALYS.[8] The deadline for the contest was February 28, 2014, and the winner would receive €500 as well as the physical copy of ALYS. During the design contest campaign, another video was posted to VoxWave's YouTube channel that gave another sample of the voice provider as well as revealed the voice provider to be Poucet, a YouTube-based utaite. March 5, 2014, is when VoxWave revealed the silhouette for ALYS' design in their newsletter. The final design, as well as the 4 runner ups, was announced on March 10.

VoxWave released more information about ALYS' development during a special presentation at the Japan Party Conference in Nanterre, Paris, France, held on March 15, 2014. Details about the planned development process included production costs, relations and contact with other VOCALOID-related companies (VocaTone, Macne.net, and Voctro Labs), the preparation for the recording process, awaiting YAMAHA's response, as well as a brief overview of ALYS' concept as a fan community VOCALOID. The period of ALYS' projected release was also announced for early 2015.[9]

Later in the year on July 12, 2014, VoxWave announced in a press release that ALYS would be developed for 'CeVIO Creative Studio' rather than VOCALOID3.[10] They maintained a positive outlook on this because of the possibility to make the voice speak as well as sing, and the potential to use CeVIO Creative Studio Free which would provide better accessibility to a larger amount of people. However, it was confirmed that because of this change, the minimal amount of money for the crowdfunding would be much higher than what was initially announced and that VoxWave did not know how much time the voice would take to be available.

After the announcement, demonstration songs and music videos were being released. VoxWave stated that the vocal used in demonstrations did not use the CeVIO technology, but was rather on a "rustic" engine. This was later proven to be UTAU and VoxWave elaborated that the prototype would only be given to producers creating songs for ALYS, never to be publicly released.

VoxWave publicly announced on December 11, 2015, that due to financial reasons they were now producing ALYS for the newly released Alter/Ego engine. A demonstration song titled "Lupin's night" was published for their end of the year holiday song as well as a livestream with David Viens of Plogue where both parties spoke about the development of ALYS, their collaboration, and the vocal itself.[11]

On March 12, 2016, ALYS was released for Alter/Ego. Amidst the release, Plogue's website actually featured demonstrations of her UTAU vocal. When replying, Plogue apologized and explained that the web dep were the ones to upload the incorrect demos.[12] Later that year, December 16, users who owned the French version of the vocal received an update. This update was to improve overall clarity and quality of the vocal and an update for the Japanese library was confirmed to be coming soon.

One of the largest complaints for ALYS on Alter/Ego was that she lacked multi-pitch capabilities. In response to this, both VoxWave and Plogue assured they were working on a solution and on March 21, 2017, a multi-pitch update of the original ALYS software, both French and Japanese, was released and distributed to owners of the original software. With the new update also came a limitation on the trial version of her software, allowing only 4 minutes of use per session. (Standard for ARIA products)

In March 2018, VoxWave launched a crowdfunding campaign that concluded at the end of April. The crowdfunding campaign was an attempt at reaching out to a larger audience by creating a narrative universe in which the history of ALYS as a character will be told, along with introducing a new character, La Voyageuse. These stories would be used as material for a story-telling album.[13]

As of September 2021, VoxWave officially closed as a company. Due to this, on December 15, ALYS was announced to be open-sourced. The character was stated to be under the free CC-BYNC-4.0 license, the UTAU vocal libraries were under the GPL-3.0 license, and the Alter/Ego version was still under a proprietary license under Phundrak's name, but was available for free.[14]

According to VoxWave, the main reasons behind picking the winning design was that she:

VoxWave has also mentioned that the pearl on her braid was added by their request as a way to make ALYS stand out.[15]

Saphirya commented that to create the design, she researched recent VOCALOIDs to see what she felt she should and shouldn't do. The headphones were originally meant to be mechanical flowers. She was also inspired by the character designs of Hyperdimension Neptunia.[16]

The name "ALYS" was chosen because the company members thought it sounded pleasant and sweet. It was also said to be easy to pronounce, especially in French, Japanese, and English. VoxWave's website also suggests a connection to "a certain literary culture".[17] "ALYS" is a variant of the name "Alice", which possesses the meaning "of nobility". It originates from the Old French name "Adelais", which, in turn, is actually the derivation of the German name "Adalhaidis", or "Adelaide".

ALYS is a 21 year old lady with dark blue hair, is 165cm tall, and weighs 54kg. Her design embodies a mix of both common virtual singer and futuristic tropes; most notably being the headset, and microphone. Her crest acts as the attachment for her tail-coat, which spells her name around the inner pearl. She has been described as an "Athena" avatar.[18]

Alys may receive updates in the future.[19]

Answer to the question of what Alys would look like if she could go into Chipspeech. Art by Pixoshiru

Ditto, including interface in Alter/Ego

Ditto, as seen in Alter/Ego 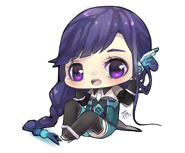